The wrath of the mighty raven

As some of my faithful seventeen readers know, last week when I parked to eat some lunch, enjoy the sun and read my book, I apparently parked over a piece of garbage/debris that Raven wanted. Great and Mighty Raven danced outside my car, berating me for my thoughtlessness and temerity. It was a great floor show.

I went back the next day to see if Raven was still there. He was.

Behold the Puissant One, Trickster Raven 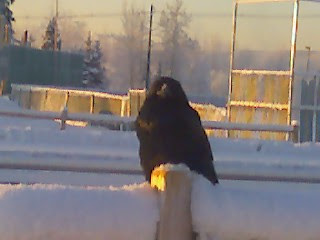 On a post, Lord of all he surveys (able to poop on whatever he flies over) 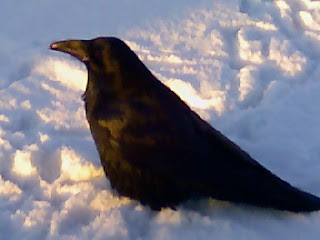 Outside my car, strutting and informing me of my inadequacies.

After appropriate propitiation was offered (a few pieces of cookie) Raven flew away. But I know he's watching. And waiting.
So am I.

*photos taken with my cell phone camera, please forgive the quality
Posted by Tania at 11:28 AM 10 comments:

Have I mentioned that before? Because I am. That doesn't stop me from really enjoying and agreeing with Shannyn Moore's latest blog entry.

I think you should go and read it.

I grew up with Shannyn. Her dad was my elementary school principal, her mom was the librarian at the other elementary school. I broke her younger sister Jeannie's front tooth at a Hallowe'en carnival in junior high (it was an accident! I still feel AWFUL about it 25 years later). Thanks to Shannyn's piano recitals I know every note to the Maple Leaf Rag.

Shannyn has been getting attention from the MSM, which is really cool. Even as a kid she was outspoken, driven, and very opinionated. Yes, there were times I hated her guts. We were kids. It looks like she's on the road to success with her chosen field, and I am so damn happy for her.

Labels: alaskans, blogs I like to read, people I grew up with that aren't in jail, politics

For Rob, Janiece, Jim, Steve, Jim, Keith, Grandpa Harold, Terry, Paula, Bruce, and all the others who have given their time and their life for a cause bigger than themselves. 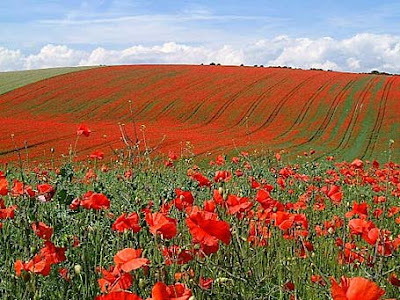 In Flanders fields the poppies blow
Between the crosses, row on row,
That mark our place; and in the sky
The larks, still bravely singing, fly
Scarce heard amid the guns below.

We are the dead. Short days ago
We lived, felt dawn, saw sunset glow,
Loved, and were loved, and now we lie
In Flanders fields.

Take up our quarrel with the foe:
To you from failing hands we throw
The torch; be yours to hold it high.
If ye break faith with us who die
We shall not sleep, though poppies grow
In Flanders fields.

Oy, it's been a busy week and weekend.

Friday night my friend Carrie decided to start a book club, and as I read too much as it is, I agreed to be a member. Our first book is something by Ann Shreve that I picked up at used from Gulliver's. John was out with questionable company, so four of us girls ended up at Lavelle's drinking champagne and eating dessert. Black bottom creme brulee pairs rather nicely with champagne, for the record.

Saturday I chatted with my grandmother for about thirty minutes, but she had to hang up on me to go deal with her poached apples in cinnamon syrup. My grandma is so cool.
Around noon John and I went to see Zack and Miri Make A Porno. Raunchy, crass, blunt, and rather sweetly poignant. Kevin Smith makes some pretty darn fine films. For the evening we were going to go to a beer tasting at the Blue Loon, but John wanted to take a nap first, and well, he was so cute snoozing that I didn't have the heart to wake him up. So, I had a nutritious dinner of leftover dip and corn chips, and snuggled into bed and caught up on some reading.

Sunday morning I caught up on more phone calls, and then went to run errands and grocery shop. This afternoon and evening has been spent cooking for the next week
chicken curry with almonds, chiles, yogurt, and spinach
mac and cheese (homemade)
the beginnings of chicken soup and enchiladas for later on in the week
I also have chili and cassoulet planned for Thursday and/or Friday.

John eats all the time, ok? I have to have food on hand as a defensive mechanism.

Mostly, life here is mundane, I'm ok with that.

So, even though it's Sunday evening, I'll leave you with some fine music from Blondie - Sunday Girl

PS - any rumors you hear about me taking my shirt off in the bar at Los Amigos Thursday night are completely true. This is why I don't drink to excess. I was completely sober, one of John's inebriated cow-orkers challenged me to swap shirts with him in the bar (it was actually relevant to the discussion they were having). So I did. Yeah, don't dare me to do dumb things like that, because I usually will, if it's only embarrassing and doesn't hurt anyone.
Posted by Tania at 10:01 PM 3 comments:

Labels: blondie, cookery, grandma joan is AWESOME, John sure does eat a bunch for being such a skinny guy, movies, other random tags that I can't think of right now

Those of my readers (all 17 of you) that are eligible to vote in this election probably have, or will have by the end of the day.

Even Catherine in NZ was working on her absentee voting options. Alaska has a vote by fax option!


OMG. I think Ralph Nader is on Talk of Alaska RIGHT NOW. How odd. How shocking. How bizarre.

Sorry. My little brain was distracted there. Nader is still nattering away.

Gotta go. Work should be done, and I want to reload fivethirtyeight.com again.
Posted by Tania at 10:32 AM 4 comments:

Blogs I read. You should too. (Work in Progress/Watch This Space)